Tee and I founded California Climbing School in 2017. Our experience teaching at NOLS, Outward Bound, Yosemite Mountaineering School, and other outdoor schools helped us develop into dynamic, inclusive, and engaging teachers.

Our aim is to promote climber safety, care for the environment, and diversity in the outdoors.

We have an alpine and wilderness focus. We are interested in making long term connections and helping people progress as climbers. Students we have trained have gone on to climb Half Dome, El Capitan, Mt Whitney, and in Patagonia.

While raising our son in the village of Joshua Tree, we offered free climbing to families we knew. These outings evolved into our kids and teen climbing classes. Many local families have been able to sign their kids up for climbing lessons which would otherwise be unaffordable through our charter school vendor program.

We have noticed that sometimes guides can lead their guests quickly up and down a bunch of routes without possessing a joy for teaching the craft. All of our guides are great teachers in addition to being skillful guides.

We offer free climbing to needy community members. Find out more in our Diversity, Equity and Inclusion initiative.

We are looking forward to helping you achieve your climbing dreams! 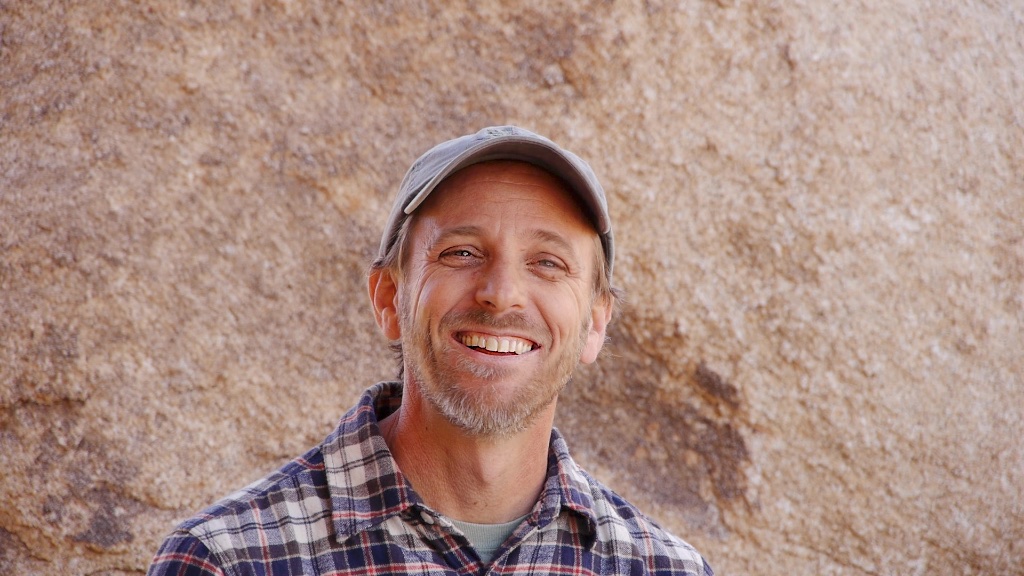 Erik started rock climbing in 1987 and has been a full-time climbing guide since 1997. He has over 2200 days of experience guiding in Joshua tree. Erik is an AMGA Certified Rock Instructor.

Erik taught mountaineering and climbing courses as an instructor with NOLS and Outward Bound. He is known for his clear and patient teaching style and furthermore has a solid background in natural history. He has a B.S. in natural resources.

Erik has climbed and guided all over the western states. He has climbed El Capitan 5 times and has summited many of the glaciated peaks in the Cascades. Erik is a Certified Wilderness First Responder with Wilderness Medical Associates. 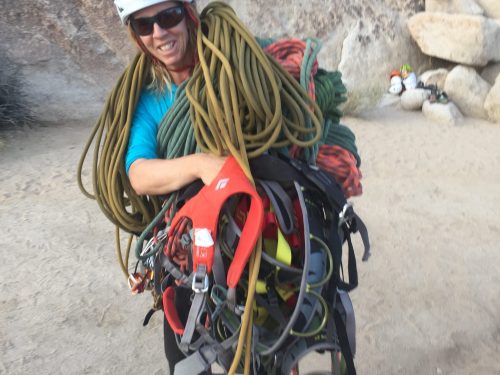 Theresa started teaching rock climbing in 1993 and is an AMGA Certified Single Pitch Instructor. She is a former NOLS and Outward Bound instructor and has a B.A. in outdoor recreation. She has climbed in almost all of the western states and was a climbing guide for the Yosemite Mountaineering School.

Theresa has safely guided many groups to remote peaks despite less than ideal conditions, and her enthusiasm and positive outlook have always lifted the spirits of her companions. Theresa is a Certified Wilderness First Responder with Wilderness Medical Associates. 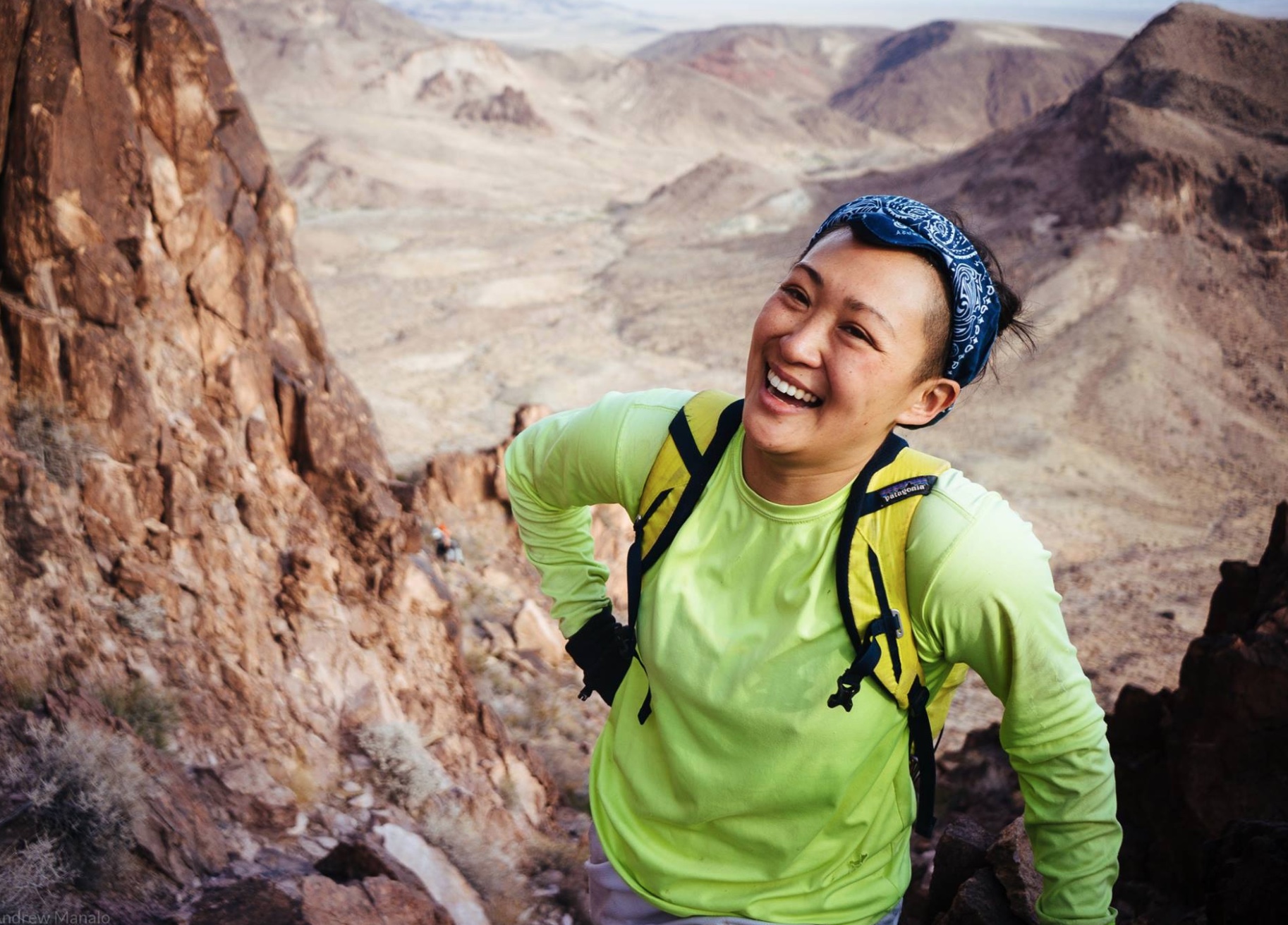 Ting grew up in Glendora, California where she often played in the foothills of the San Bernardino Mountains. In 2002, she went to UC Berkeley where she earned degrees in cello and painting. She joined the staff at Mission Cliffs, a San Francisco climbing gym, where she found the positivity of the climbing community to be nurturing and inspiring. Ting loves all kinds of mountain sports and terrain. She especially loves peak bagging in California, and is as enamored with desert peaks as she is with the High Sierra. She will happily clip bolts, place gear, ski, trek, or whatever it takes to get a good view in the mountains and have some fun getting there. Ting has led dozens of alpine and technical climbing trips in the Sierra and multipitch days in the California, Nevada, and Arizona deserts. She is honored to be able to climb and guide in Joshua Tree, a place she finds uniquely beautiful. 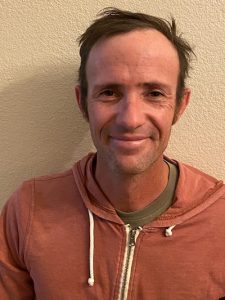 Andy Gorrill divides his time as a climbing guide, arborist, and musician. Andy is a true native to the area. Andy has climbed and explored JTNP for over 25 years and still finds new and obscure areas to explore. From new routes to classics, hard to easy, obscure to obvious, cracks to face to sport to slabs, Andy knows the layout of JTNP and can provide an awesome climbing experience.

Joshua Tree National park has become insanely popular in recent years. But for Andy, this is an opportunity to guide his clients to areas without crowds or traffic.

Andy is an AMGA Single Pitch Instructor and is a Certified Wilderness First Responder with Wilderness Medical Association. 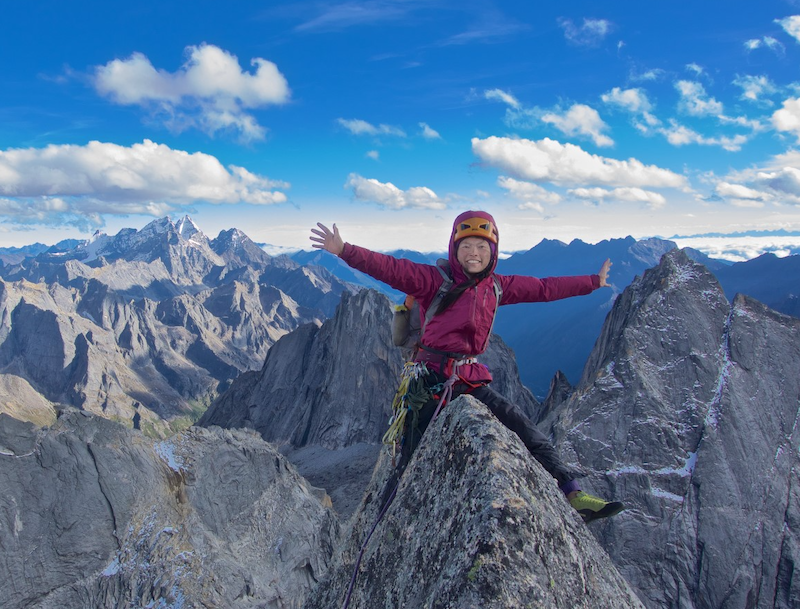 Born in Taiwan, Szu-ting came to the US to study but fell in love with the sport of climbing. She has contributed to Alpinist Magazine, has climbed 40 desert towers in one season, has done multiple alpine first ascents in Asia and Patagonia, and in 2017, she completed a north to south traverse of the Wind River Range and summited 33 peaks along the Continental Divide.

Szu-ting is an AMGA certified Rock Guide and SPI Provider. She started guiding and instructing in 2008 and has authored five books on the subject of climbing. After 7 years of van life, she now resides in Las Vegas with her husband and two cats. 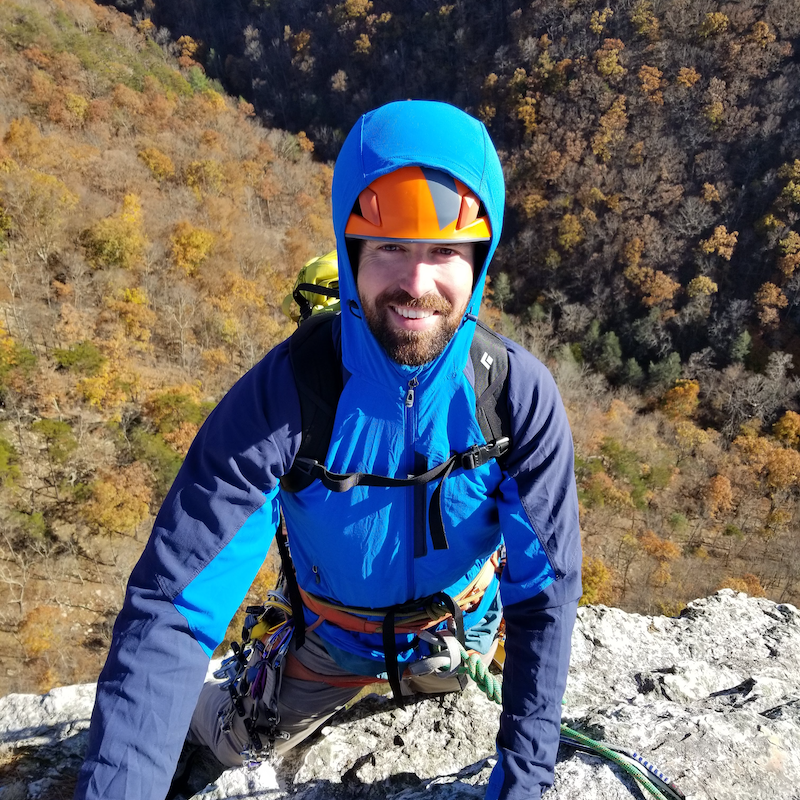 Troy grew up in southeast Ohio and has been teaching climbing since 2012.  He splits his time between guiding in Joshua Tree and guiding at Seneca Rocks, West Virginia. He’s currently working on a degree while he spends his time guiding, climbing, cooking, and is an aspiring martial artist.

The diversity of visitors to Joshua Tree does not reflect the diversity of California or the USA.
For example, the original inhabitants and caretakers of the park, the Native Americans, have many barriers to entry despite their great work in preserving the landscape over the centuries. In fact, many groups that are a big part of our general population have barriers to access national parks.

Under-represented groups include Black and Brown people, Native Americans, women of color, low-income locals, members of the LGBTQ community, and people with disabilities.

Our guides volunteer one day a month to help introduce outdoor climbing to people who would not otherwise have access. If you know someone who could benefit from this program, please have them contact us so they can try outdoor climbing with a professional guide for free.

Our long-term goal is to train women, people of color, LGBTQ and the disabled to become climbers, climbing guides, and guide service owners.
As white people, owners Erik and Theresa have enjoyed many privileges to access over the years, such as locals helping out with a stuck vehicle or giving directions in a remote area. We’ve camped on private property, thinking it was public land and got a talking to, but never feared for our safety or had the cops called on us.

If we had looked different, not all of those interactions would have necessarily gone so well. No one should be afraid for their safety if they have car trouble or get turned around on their way to a climbing area.

We hope the privileges we have had will be enjoyed soon by ALL people.

Theresa and I are heartbroken by the killings of Breanna Taylor, Elijah McClain, Ahmaud Arbery, George Floyd, Eric Garner, Tamir Rice, and many other black victims of police brutality. As a white man I’m embarrassed. It’s hard to believe how little progress our society has made in the 400+ years since slavery began. We believe in the Black Lives Matter protests, and see them as important steps to end systemic racism. We also believe in women’s rights, LGBTQ rights, body positivity, and saving the environment..

The fight to end racism starts with self awareness. In my case as a white man, that means seeing the privileges I get to enjoy every single day. If I want to go jogging I don’t worry.. If I want to stop for an ice cream at a store in a rural area while I’m on a climbing road trip and I notice a confederate flag, I don’t think about my safety. Listening to Black voices is helping me see more of what I take for granted and what others do not get to enjoy.

“We can’t go jogging without worrying about being lynched; we can’t go bird-watching without having the police called on us. Our children can’t go outside and play without us worrying about them being gunned down and labeled ‘suspects.’ We can’t sleep in our own beds without being executed. The same rights and protections that our white peers are afforded are not afforded to us. We can’t arm ourselves without being labeled thugs and shot.” – Michael Martin of Chicago

I am hearing from black and brown people how often rude and insensitive comments come their way when they recreate outside. Micro-aggressions, gas-lighting, stares, and on and on. These incidents are happening all all across the United States: in the Southeast, Northeast, the Rockies, and the West Coast.

We white people need to call racism out every time we see it. Black and brown people cannot get this done without whites doing our part. Yes we should donate, but that is not enough. We need to speak up even when it makes us feel uncomfortable.

Theresa and I appreciate the value of living in a multicultural community. We both grew up in San Francisco and we embrace the values of tolerance and diversity that shaped our childhood.

California Climbing School is committed to creating a safe and welcoming learning environment for all people on our programs, regardless of race, ethnicity, body type, disability, gender, age, sexual orientation, or religion. We are educating ourselves in how to be anti-racist and talking to our son about racism and privilege.

We are working towards the day when black and brown people are hiking, climbing, skiing, fishing, biking, bird watching, collecting wild plants, sailing, and mountaineering just as often as whites.

We all need the therapy of the outdoors.